Samsung introduces Pattachitra painting of Odisha in its lifestyle television

Bhubaneswar: The famous Pattachitra painting of Raghurajpur, Odisha will now be visible on Samsung television.

Samsung has introduced Pattachitra painting of Odisha to its lifestyle television. ‘The frame’ is a TV when it’s on and art when it’s off.

Four pattachitra paintings of artisan Abhimanyu Bariki from Raghurapur will be displayed on the frame.

Happy that his paintings will be displayed on Samsung television, Abhimanyu said, “A representative of Samsung came to Ragurajpur and saw some of my works and works done by my family members. They were impressed with the paintings and shared that Samsung is coming up with something interesting and they would approach me. They took some of my paintings.” 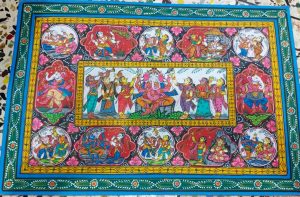 “After a few weeks, they asked me to share some pictures of my large works. I shared with them a Rass Lila painting of Lord Krishna, Ganesh painting among others,” he informed.

Abhimanyu is optimistic that such an initiative of Samsung would help to promote the Pattachitra paintings of Odisha on large scale.

Over 1400 artworks of various artisans will be displayed in the frame. This initiative aims to revive Indian folk art and bring them to the living rooms through The Frame.

An art form done on a piece of cloth, where “Patta” refers to cloth and “Chitra” to a picture. The art form is known for its rich colourful application, creative motifs, and designs, and portrayal of simple themes, mostly mythological in depiction.