The Mountain Hockey, Odia Documentary On Hockey in Disney+Hotstar

Bhubaneswar: A documentary film on hockey titled ‘The Mountain Hockey’ made by three Odia film makers is streaming on popular OTT platform Disney+Hotstar.

Odisha is known for giving some of the best hockey players at the national level and the state has also hosted the World Men’s Hockey World Cup hosted at Kalinga Stadium in Bhubaneswar in 2018.

It was during the hockey world cup, the three filmmakers Avinash Pradhan, Debasish Mohapatra and Braj Raz Behera envisaged the idea of making a documentary on Hockey in Odisha. 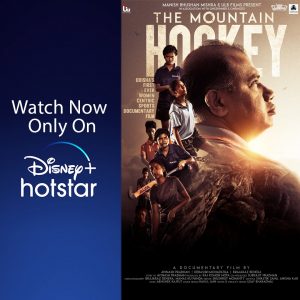 The documentary depicts the story of hockey coach Rajendra Kumar Kujur, who has devoted his life  to popularise hockey among tribal girls in remote areas of Odisha and trains them to become an excellent player representing the country. He has trained around 400 girls.

Sharing about what inspired them to make the documentary, Debasish said, “When the Hockey world cup was organised at the Kalinga Stadium, it motivated us to make a film on the game. While doing research we came to know about the works of hockey coach Rajendra Kumar Kujur who has been teaching hockey to tribal girls.”

We travelled to Amlikhaman village in Sambalpur district to do further research on him, he said.

Financial support was a major issue, however through crowdfunding they managed to shoot the film in 2019 with a small team. However, Covid pandemic delayed the post-production process and release of the documentary.

Overwhelmed with the OTT release, Debasish said, “We wanted the world to know the story of Rajendra sir and his students. We are happy that our documentary got a good platform. Producer Raj Kishore Hota and presenter Manish Bhusan Mishra helped us a lot to release the documentary in the OTT platform.”