Koraput: Coordinated efforts of health workers ensured a reluctant villager in a remote area of the Koraput district had her third delivery under proper medical care.

On October 23, 35-year-old Ichai Mandingya of Baghamari village under the Pipalpadar sub-center of Laxmipur block in Koraput district gave birth to a healthy baby in the nearest Community Health Center (CHC).

However, giving birth to a child in a remote place like Baghamari village is not an easy task. With the continuous efforts of frontline health workers, volunteers, and villagers, Ichai Mandingya could reach the nearest Community Health Center in time for her delivery.

The nearest health Center located at Laxmipur is 10 km away from Baghamari village and taking a pregnant woman to the centre is a herculean task due to the lack of a motorable road. To reach the health centre one has to cross a river.

Ten years ago, Ichai had a stillborn child. She got complications during the seventh month of her pregnancy due to low hemoglobin count. Her family members took her to the health centre at Laxmipur. With the help of a few villagers, they carried her on a cot and crossed the river. After that Ichai had to walk around two km on a muddy road to Pipalpadar to avail of an ambulance service. However, even after such an effort, the child couldn’t be saved.

The traumatising experience affected Ichai severely, and she was reluctant to go to the hospital for the delivery of her third child.

The cluster coordinator of local NGO Arata Takri and frontline health workers visited her during the seventh month of her third pregnancy in August 2022 and found her severely anemic with a haemoglobin count of 4 gm. The team advised her to go to the health centre immediately but she was reluctant. The severity of her condition was told to her husband and family members who convinced her to go to the health center.

Seeing the condition of Ichai, the villagers also came forward to help the family, and with the team of frontline health workers including Takri, they took her health centre from where she was taken to the Laxmipur hospital. There she received the much-needed iron injections and underwent other treatments. She was further referred to Koraput hospital where she gave birth to a healthy baby.

“I was reluctant to go to the hospital due to my previous experiences. I had the fear of losing my child. The health workers like ASHA, ANM, and my family members convinced me. Though I was ready but negative thoughts still bothered me as I was not sure about the safety of my child,” shared Ichai.

“I am thankful to everyone for ensuring the safety of both of us,” she added. 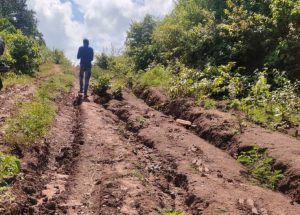 Stressing on making proper arrangements for health workers to reach remote areas, Dr. Brajesh Merta, Health Officer of UNICEF said, “Though we have a system in place where door-to-door visits by ASHA, ANM, and VHND, are done once every month. However, there is some gap. Otherwise, the pregnant women in the region would not have to be deal with severe anaemia. In UNICEF, we advocate for more bike ambulances to ensure regular health check-ups in the hamlets.”

Speaking about the issue in the region, the ASHA worker of Baghamari, Subhranti Miniaka said, ‘During pregnancy only such issues arise, or else nonpregnant women are healthy.”

Subhranti along with Anganwadi didi Nibedita Majhi has been spreading awareness among villagers about availing of medical check-ups during pregnancy. They would call an ambulance, MHU vehicles, and ANM workers for regular checks up, and made other arrangements to ensure that the mother and the child are healthy and treated well.

They provided proper nutrition, calcium, iron tablets, chatua powder, khaja, and eggs to pregnant ladies. They even ensure the expecting mothers of the region are included under the ‘Janani Suraksha Yojana’ and ‘Mamata Yojana’ and get all the benefits.

Subhranti and Nebedita even informed villagers of antenatal and postnatal check-ups and what sort of prevention one needs to take during pregnancy.

Lamenting about the lack of proper roads and telecommunications in the region, Dr. Meena Som, Health Specialist of UNICEF also stressed that government should come up with an initiative to provide vehicles like two-wheelers to health workers so that they could reach remote areas.

Appreciating the works of health workers at the grassroots level, Santosh Behera, Regional Social Behaviour Change Communication Consultant of UNICEF said, “We can see similar situations in various remote areas. I feel these challenges show new ways and innovations to overcome the issue. The efforts of frontline and community health workers would bring a change in the future.”