Mahapatra directed the officials to finish the construction work of the stadium by November 30. 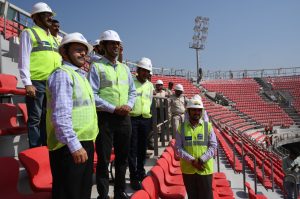 “The construction work of Birsa Munda Hockey Stadium has reached the last phase. It would be opened for practice matches soon after the completion of the construction work. Parking lots, drinking water, lavatories, and other facilities for the spectators are being developed now,” he said.

The officials also inspected the expansion of Rourkela airport which is likely to be completed by November 30.

At least 20 matches of the Hockey World Cup would be played in Birsa Munda Stadium. “To ferry players and spectators charter flights would operate between Bhubaneswar and Rourkela during the mega event,” informed Chief Secretary.