Kendrapara: In Kendrapara, ‘Kaincha’ or golden grass has become synonymous with prosperity.

For close to 3,500 women, who are a part of 200 self-help groups (SHGs), the golden grass craft has not just brought in a sense of financial independence but also empowered them at various levels.

Primarily a women-dominated craft, it has taken the shape of a cottage industry that helps them earn anything between `3,000 and `12,000 a month. The role of men is limited to collecting the reed grass which attains a golden hue and glossy appearance on drying.

“The grass is found in abundance in riverside villages of the district. So deeply rooted the craft is in our culture that it is passed down from one generation to the other. Over the years as demand for Kaincha products is on the rise in both Odisha and outside because of its eco-friendly nature and biodegradability, our income has increased. The money helps us contribute to our family income and also take care of our children’s needs,” said Nirupama Swain, a craftswoman from Bharatpur. 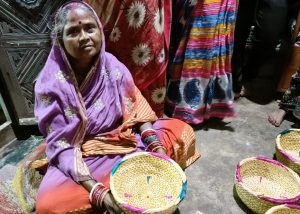 In the neighbouring Jajanga village, it is a custom that every newly married woman has to learn to weave golden grass after arriving at her in-law’s house. “When I got married and came to this village, I joined an SHG in our community to learn how to weave golden grass, and after a few months, I was able to create a variety of items. Right now, I make `5,000 every month from it”, said another artisan Nirmala Nayak of Jajanga.

Jajanga and Baro villages of the district have golden grass clusters where women practise the craft during their spare time. The grass after being dried is woven to create wonderful craft items like grass mats, dainty baskets; table mats, coasters, boxes, wall hanging and hats, etc.

To provide women training in the craft and market linkage to sell their products, the Handlooms, Textiles and Handicrafts department has been implementing the Union government’s World Bank sponsored Skill Acquisition and Knowledge Awareness for Livelihood Promotion (SANKALP) scheme. “With the assistance of e-commerce behemoths like Amazon and Flipkart, the craftspeople of Baro and Jajanga villages are now able to sell their golden grass crafts across the globe,” said Jyotsnarani Jena, a trainer under the SANKALP scheme.

Besides, NABARD organises training camps at regular intervals for the women to upgrade their skills. And now with the Odisha State Cooperative Handicrafts Corporation Limited seeking a geographical indication (GI) tag for the centuries-old craft, the women are hopeful of brighter days ahead. IP attorney P Sanjay Gandhi moved the application on behalf of the corporation.

The GI status, as per researcher Basudev Das, will provide the craft a unique identity because no one will be able to use the name incorrectly to promote comparable crafts.

(The story is a part of the UNICEF-SAWM mentorship programme for young women journalists of Odisha).

‘Medicines from Sky’: Drones are used in Arunachal Pradesh to deliver medicines in remote areas

CRUT awarded the ‘Most Innovative Bus Transit System in India’