‘Medicines from Sky’: Drones are used in Arunachal Pradesh to deliver medicines in remote areas

Itanagar: In a major development to provide medical facilities in remote areas of Arunachal Pradesh, a drone service has been started to deliver essential medicines to inaccessible areas.

On November 9, a drone flew to conduct the first-ever delivery of life-saving medicines from Seppa to a remote region of Bana located in the Richukrong circle of East Kameng district in Arunachal Pradesh.

In a remarkable feat, the first delivery of medicine under the #EastKameng district, through a drone service was successfully conducted. This initiative by #GoAP will drastically reduce the time & turmoil in moments of medical necessity in the remote regions of the state. pic.twitter.com/RNsnB3F5Wy

This is being done under the ‘Medicines from Sky’, initiative launched by the state government in August this year in collaboration with the World Economic Forum (WEF).

Considered a game changer in the health sector, the initiative aims to reduce the time and turmoil people face during a medical emergency.

Redwing Aerospace, a Bengaluru-based company that manufactures drones has been engaged for this project which is funded by the United States Agency for International Development (USAID). 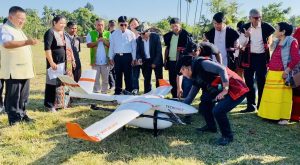 The livestock vaccines against Foot and Mouth Disease (FMD) were delivered from Roing to Paghlam in Arunachal Pradesh.

Chief Minister Pema Khandu tweeted about this on Monday.

Launch of ‘Medicine From Sky’ has heralded a new dawn in Arunachal.

Today for the first time livestock vaccines were delivered by drone from Kangkong to Paglam in the Lower Dibang Valley district.