Chennai: Sekar Patchai and Tanvi Jagadish successfully defended their title by winning a gold medal at the Alampara Stand Up Paddle National Championship 2022.

The championship was being hosted at the Alampara Surf Turf under the aegis of the Surfing Federation of India, the governing body for surfing & stand-up paddling in India.

“It feels very good to defend my title. I would also like to thank the Surfing Federation of India for restarting all the competitions as these competitions will play a key role in preparing all of us for the season ahead nationally and internationally,” said an elated Sekar Patchai,

Patchai is the only male athlete to have represented India at the World Stand Up Paddling Championships, after defending his title. 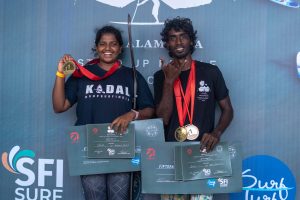 The field at the championship saw participants from across the country and featured technical and sprint races for the first time in the country as per international racing standards.

Tanvi Jagdish, the only female athlete to have represented India at the World Stand Up Paddling Championships, said, “It’s a very happy feeling first that competitions in Stand Up Paddling are back and then to defend my title. The Surfing Federation of India has done a great job in promoting the sport and I was pleasantly surprised to see so many women competing this year. I hope that this only grows from here and we have many more competitions to participate in this year.”

“It’s very encouraging to see that even after a very tough two years we could host the championship with such a fantastic turnout. As a federation, we are committed to the growth of Surfing & Stand Up Paddling in India. We would see more such events,” said Arun Vasu, President, of Surfing Federation of India.

Around 50 participants including men and women competed at the recently concluded championship.

Sulochana Das elected as the first woman Mayor of BMC