Bhubaneswar: Rahul Maharana, a young boy from Ambadiha village in Khurda district is on cloud nine after Prime Minister Narendra Modi in his ‘Mann Ki Baat’ programme aired on Sunday praised him for his efforts towards cleaning plastic garbage from mangrove forests in the Devi estuary near Astaranga in Puri district.

The PM said, “Rahul goes to the pilgrimage sites in Puri early in the morning every Sunday, and clears the plastic garbage there. He has cleaned hundreds of kilos of plastic garbage and dirt so far. As citizens, we must carry out our duties, whether it is cleanliness, nutrition or vaccination… all these efforts also help us in staying healthy.” 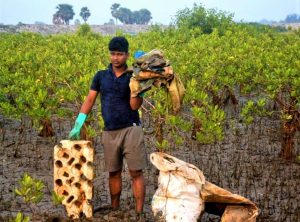 The 22-year-old Rahul works as a security guard in a private company in Bhubaneswar and every Sunday visits the Astaranga beach in Puri district to clean the garbage.

“Getting appreciation from the Prime Minister is big for me. I never thought that my work would be noticed by anyone. I was just doing the work to protect the mangroves and keep the area clean from plastic garbage,” said Rahul.

Since 2018 he has been actively volunteering in beach cleaning. Initially he was involved in cleaning in Pir Jahania beach and Rushikulya beach. Later when he understood the importance of the mangrove forest and its ecosystem,  he started collecting solid wastes from mangrove sites which including plastic, clothes, and other non-degradable wastes. 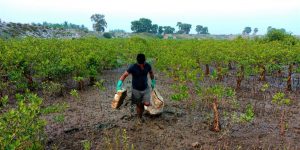 In January this year, he launched a campaign to clean the Devi estuary and the beach. He alone collected over 1000 Kg of waste from the site.

Sharing how it stated he shared that a few years back, he along with his friends went Astaranga to see the beach and the mangrove forest. “During my visit, I noticed plastic wastes everywhere. I decided to travel every week and engage a few hours to clean the site,” he said.