Odisha Open badminton: Unnati Hooda to clash with Smit Toshniwal and Priyanshu Rajawat with Kiran George in the finals

Smit reached the finals after defeating another pre-tournament favourite Ashmita Chaliha by 21-19, 10-21, 21-17 in a 61-minute semi-final.

In the men’s singles semi-finals, Priyanshu Rajawat registered a straight games win over Kaushal Dharmamer by 21-17 21-14. Priyanshu will take on Kiran George, who defeated Ansal Yadav 19-21, 21-12, 21-14 in the other semi final match. 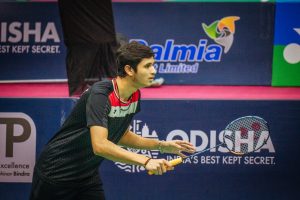 In the mixed doubles, Treesa Jolly and MR Arjun defeated Swetaparna Panda and Balkeshari Yadav by 21-9, 21-9. The pair will face Malaysia’s Nur Mohd Azriyn Ayub and Lim Khim Wah in the final on Sunday.

Treesa Jolly/Gayathri Gopichand (India) registered yet another a comfortable win to advance into the finals 21-9 21-6. The pair will clash for the title with the pair Sanyogita Ghorpade and Shruti Mishra.