The event will see 16 countries in the 7th edition of the FIFA U-17 Women’s World Cup scheduled from October 11 till October 30.

This is for the first time India is hosting U-17 FIFA World Cup. Kalinga Stadium (Bhubaneswar), Pandit Jawaharlal Nehru Stadium (Goa) and DY Patil Stadium (Navi Mumbai) are the three venues where the even will be held. 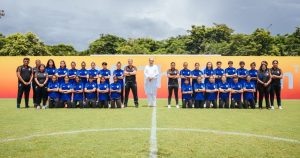 A high-level preparatory meeting, under the chairmanship of Chief Secretary Suresh Chandra Mahapatra, was held on Friday at Lok Seva Bhawan where Sports and Youth Services Secretary R Vineel Krishna presented the road map for infrastructure development and organisation of the matches.

The government has decided to allow spectators to watch the matches at the Kalinga Stadium, for which tickets will be sold online through the website https://india2022wwc.com/explore/c/fifa.