Bhubaneswar: ‘Adieu Godard’ an Odia feature film is all set for theatrical release on 2 September in Bhubaneswar, Cuttack, Kolkata.

Written and directed by Amartya Bhattacharyya, the film is produced by Swastik Arthouse in collaboration with FilmStop Entertainment and Les Films de la Haute-Vallée. 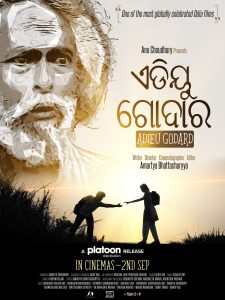 The film has been screened at various film festivals in India and abroad.

Choudhury Bikash Das portrays the main protagonist named Ananda who is addicted to watching pornography secretly with his friends in a small village. They accidentally come across Godard’s film. While his friends were dissatisfied, Ananda developed an obsession with Godard’s film.