By Bureau The News Hashtag On May 17, 2022 Last updated May 17, 2022 56
Share
Bhubaneswar: The makers of Odia feature film Adieu GODARD are on cloud nine as the film received another prestigious award this month. The film won the ‘Dare to Dream’ award at the 24th UK Asian Film Festival (UKAFF) held in London.
The festival supported by the British Film Institute (BFI) and the Arts Council of England, is one of the oldest running Asian film festivals. At the festival, Adieu Godard had three screenings including the BFI Southbank theater. 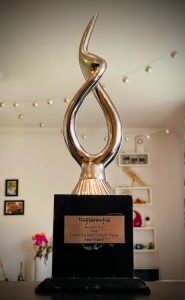 Written and directed by Amartya Bhattacharyya, the film is produced by Swastik Arthouse in collaboration with FilmStop Entertainment and Les Films de la Haute-Vallée.

Choudhury Bikash Das portrays the main protagonist named Ananda who is addicted to watching pornography secretly with his friends in a small village. They accidentally come across Godard’s film. While his friends were dissatisfied, Ananda developed an obsession with Godard’s film.

Elated with the news, actor Dipanwit Dashmohapatra, who plays the character of Joe in the film said, “Considering the present scenario of Odia films, an Odia film getting the ‘Dare to Dream’ award in London and the Best Film award earlier at Kolkata International Film Festival is a beacon of hope for the future of Odia cinema.”
“I always believed that a cinema like ‘Adieu Godard’ is essential for both the communities, people who make cinema and people who watch cinema. Winning this award is such a specimen of this,” he added.
Actor Choudhury Bikash Das, who plays the lead protagonist Ananda in the film, said, “This is the sixth award for the film at an International Film Festival and it shows how well this film connected with the global audience. As Ananda, I have received so much love and I am really happy to be a part of this film. I hope the film reaches the people of Odisha soon.”
Producer Jitendra Mishra is going to present at the ‘Marche du Film’ during the ‘75th Cannes film Festival’ scheduled from 17th May this year. The film will also be screened in Stuttgart, for the German Premiere at the Indian Film Festival of Stuttgart next month.
56
Share

over 40 highlands created in Kaziranga to protect animals from floods