They later enjoyed the much-awaited tackle between India against Bangladesh at the SAFF-U20 Championship ongoing there.

Minister for Sports and Youth Services, Tusharkanti Behera shared, “It gives us immense pleasure to have Speaker and Members of the Odisha Legislative assembly amongst us here at the Kalinga Stadium. Under the leadership of Chief Minister, Naveen Patnaik and his vision, Sports for youth, youth for future’, sports has been accorded priority status and this has propelled Odisha to be a front runner for the top sporting destination in India. Sports and Youth Services Department has been investing in upgrading and developing sports infrastructure, training and coaching and creating opportunities from block to state level so Sports flourishes in the State and we have larger representation from Odisha at the national and international level.” 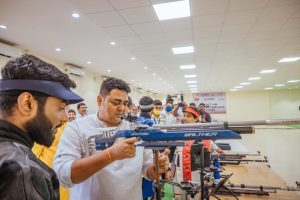 Chief Secretary, Govt of Odisha, Suresh Mahapatra emphasised on the importance of giving adequate training, coaching, infrastructure, Sports Science and nutrition to athletes so they can train and transition to High Performance Centres and excel at national and international platforms. Within a short span, athletes from Odisha have been making their mark in Swimming, Athletics and Hockey and in coming years Odisha will produce many players.