Puri: Devotees of Lord Jagannath and his siblings witnessed the Hati Besha of the deities at Snana Mandap of Srimandir on the auspicious occasion of Deba Snana Purnima on Tuesday.

Lakhs of devotees thronged the pilgrim town to see the bathing ritual of Lord Jagannath, Lord Balabhadra and Goddess Subhadra along with Sudarshan on Snana Mandap. 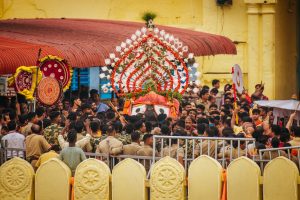 Earlier in the morning after the pahandi of the three deities, they were  decorated with flowers and Tulasi (holy basil). The priests worshipped the holy water brought by servitors a well located inside the shrine. 108 pitchers of the water were poured on the deities.

Later after the completion of the bathing rituals, the deities adorned with Hati Besha or Gajanan Besha. 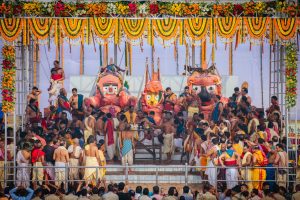 Snana Jatra is an important ritual related to Lord Jagannath after which the three deities get sick and thus they rest for 14 days.

Kalabhoomi gets a bus library with over 4000 books