Kalabhoomi gets a bus library with over 4000 books

Bhubaneswar: A beautiful Bus Library has come up at the Kalabhoomi which would give bibliophiles in various age groups an opportunity to explore new books during the evening time.

The unique thing about this library is that an old discarded bus donated by OSRTC has been converted into a beautiful storehouse of knowledge for the readers.

The library has been set up by Bakul Foundation in association with the Department of Handlooms, Textiles and Handicrafts, and SIDAC. 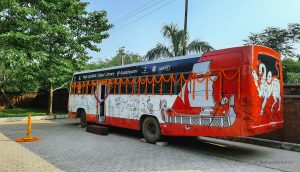 The library is established in the parking space. “We decided to utilize the parking space of the museum as it would allow the library to have flexible hours as per the needs of the users, and it gives visibility and proper access,” he said.

Bakul Foundation is on a mission of setting up a satellite libraries across the city. The first one came up in Forest Park as a tree library, then an old refrigerator was used to start a library in Ekamra Haat, then a library was set up in a Cafe in 16 Satya Nagar. This is the fourth satellite library. 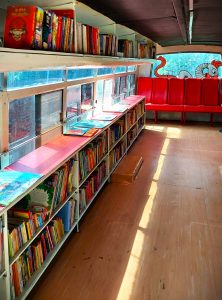 After getting the bus, they collected funds through crowdfunding and refurbished the bus as per the plan.

The outside of the bus has been attractively designed using motifs from pattachitra and other traditional crafts of Odisha. There is a beautiful biota, a metaphor for stories traveling across seas, which has its sails looking like a book. At the back, one gets to see the Nabagunjara reading a book as well.

There are over 4000 books for children and adults in the library. Readers can avail of the facility from 4 pm to 8 pm on all days except Monday. Readers can read inside the bus or in the cool natural environment outside the bus.

There will be regular sessions on storytelling and craft workshops at the library as well, informed Sujit.

Sharing about the concept of a satellite library, he said, “The idea is to have books within easy access wherever people go, so that they may feel like picking up a book and get into a journey of reading.”