Bhubaneswar: Actors, doctor and a social activist come together to help a two-year-old girl with severe Covid symptoms as her parents struggled to get a bed in a hospital in Bhubaneswar.

Due to the efforts of Ollywood actor Sabyasachi Mishra, Dr Amrit Pattojoshi, activist Srinivas BV and Bollywood actor Sushant Singh, the child finally got a bed in a private hospital in Bhubaneswar and is being treated. 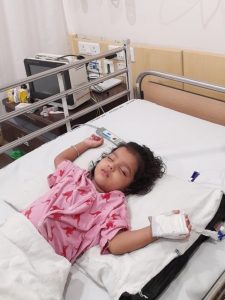 Bollywood actor Sushant Singh looked for help to arrange a bed in a hospital for the two-year-old child as her parents, who are also Covid-19 positive, were not able arrange a bed for their child whose oxygen level was below 85.

Sushant’s wife is an Odissi dancer and the child is the daughter of her Odissi teacher Lingaraj Pradhan. When she learned about her condition, she shared about this to her husband Sushant, who immediately approached Srinivas BV, a social activist based in Delhi to arrange some help in Odisha in getting a bed for the child. Srinivas, understanding the urgency, called Ollywood actor Sabyasachi Mishra for help.

Sabyasachi, who during the pandemic has turned into a messiah for millions of migrant workers and has been helping people in the second wave as well, immediately joined the mission of arranging a bed for the child.

Sabyasachi called a few of his friends including doctor Amrit Pattojoshi. Though it was a challenging task of arranging a bed in a hospital during the surge of Covid cases in the city and approaching cyclone, the duo put in all their effort to save the child.

Thanks to the effort of Sabyasachi and Amrit, the child was admitted to AMRI Hospital, Bhubaneswar on Wednesday at midnight. Her condition is stable now and her oxygen saturation has also improved.

“I have worked in coordination with Srinivas in some cases during this period. When I got the call, it was the intervening night of May 25 and 26, when the state was bracing for cyclone Yaas. It was post midnight. I tried to connect with some of my friends and Amit Pattojoshi immediately came forward for help. The child got a bed and her treatment was initiated immediately. Thankfully after 24 hours, her condition started getting better. Now, I feel satisfied,” said Sabyasachi, who has been attending over 150 such SOS calls on a daily basis from both covid and non-covid patients.

“Sometimes, I fail to attend some calls and it hurts. But I am happy that I am trying my best to help as many people as possible,” said the actor who is trying to raise a group of around 12,000 volunteers across the country to up his volunteer activities.

“We received a call at midnight of May 25 to help the child. We were worried as we have never heard about a child with such severe covid symptoms and another challenge was the approaching cyclone. We had to act fast as time was crucial,” shared Pattojoshi, who is a renowned psychiatrist.

“The patient was in shock, she needed oxygen, IV fluid and antibiotics. We approached a few hospitals and luckily we managed to get a bed for her. We are happy that she has recovered a lot and in a few days she will be discharged from the hospital,” he informed.

Appreciating the efforts of Sabyasachi, Srinivas and Dr Pattojoshi, Sushant thanked them for saving the child.