Australia won the T20 World Cup title at Dubai International Stadium on Sunday. They defeated New Zealand in the final by 8 wickets. The New Zealand team had set a target of 173 runs. Chasing the target, the Australian team won the game with seven balls remaining. 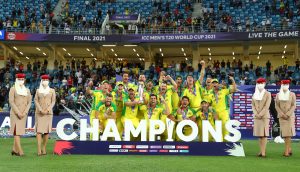 The half-centuries from Mitchell Marsh and David Warner helped the team to lift the title.