An effort to bring back house sparrows

The house sparrow, once a common bird to be sighted everywhere has vanished over the years with the increase of concrete structures. However, there are a few bird lovers who are on a mission to bring back the sparrows.

Rabindranath Sahu, secretary of Rushikulya Marine Turtle Protection Committee (RMPTC) has been on a mission to bring back house sparrow to the neighbourhood. In 2007 he started an initiative for the conservation of sparrows in Ganjam district which has now spread to other districts of Odisha as well.

“We have been installing artificial nests made of earthen pots, plywood, and cardboard in the verandah of houses or other places to support the reproduction of house sparrow. We started this initiative in Ganjam first,” said Sahu.

In Ganjam his efforts have already started showing positive results. “In 2004, in my village, there were barely seven house sparrows, however now there are over 400. Even in nearby villages, its population has increased,” shared Sahu.

These birds mostly prefer roofs of thatched or pucca houses for nesting, however, with increasing concrete jungles, these birds are finding it difficult. The artificial nests help them to build their nests. 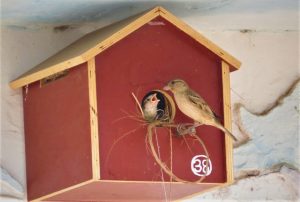 The conservation effort which started in 2007 in a few villages has so far covered 16 districts in the state. “In last 10 years, the population of sparrows has increased ten times. We want to cover other districts as well with the support of the forest department and district administration,” he added.

This year Rabindranath Sahu with the support of the forest department started the initiative in six new districts which include Sambalpur, Jharsuguda, Keonhjar, Bargarh, Rourkela, and Malkangiri.

“We have been working in many districts and this year we included six districts to spread awareness among people to conserve sparrows and help them populate again. Each district was given over 100 earthen pots, cardboard houses, and feeders,” said Sahu. 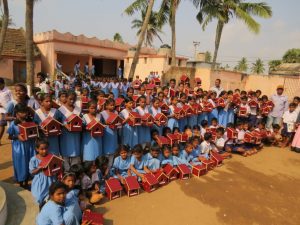 “We conducted various events in the schools of these new districts to motivate students to actively take part in the initiative,” he informed.

Delhi government in 2012 declared house sparrow as state bird similarly Bihar government in 2013 declared it as the state bird, Sahu hopes that the Odisha government would also come up with plans to protect the species. “My only effort to listen to the chirping of sounds of the house sparrow in our courtyards and neighborhood again. This would be possible with the efforts of all the people across the state. Though it will take some time however it is possible,” said Rabindranath .

In Sambalpur, members of the Chadhi Club and wildlife division are also supporting Sahu to spread the initiative in the region.

Asish Kumar Pradhan, President of the Chadhei club, said, “We are doing it for the first time in Keonjhar, Rourkela, Jharsuguda, and Sambalpur. Next year we are planning to do this in entire western Odisha. With the support from Rabi Bhai, we are trying to create awareness among children as they are the future. We are installing houses for the sparrow in various locations so that they can create their nests and lay eggs.” 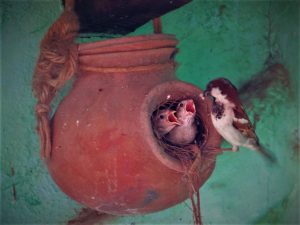 Stating that in Sambalpur town, house sparrows are visible in good numbers in some areas, Pradhan said, “There are some pockets in Sambalpur town where we see a good number of sparrows, so we are trying to create conducive environment for them to breed and increase their population in other areas as well. We are even planning to plant more trees.”

Jamadarpali, Durgapali, and Huma temple are the few where we see a good number of sparrows, he added.

Exhorting to people to support the initiative, he said, “They are like our family members. We have destroyed their houses or scope to build their nests and thus have left us. It is our responsibility to bring them back home. We are hopeful to get results in the coming days.

Special screening of ‘Dennaa the Wings’ held in Bhubaneswar