New Delhi: The eternal Amar Jawan Jyoti at India Gate has been merged with the flame at the National War Memorial in a military ceremony followed by a parade on Friday.

The flame which has been burning since 1972 has been extinguished in a military ceremony in presence of the three defence chiefs.

Soldiers from tri services marched carrying the flame from India Gate to the war memorial, a few metres away from there.

Amar Jawan Jyoti was built in 1972 underneath the India Gate arch to commemorate soldiers martyred in the Indo-Pak War of 1971. 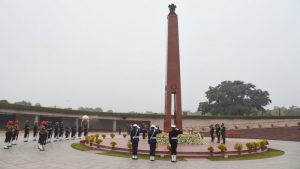 The National War Memorial is spread over 40 acres in the India Gate complex behind the canopy and is dedicated to soldiers killed during the Indo-China War in 1962, Indo-Pak Wars in 1947, 1965 and 1971, Indian Peace Keeping Force Operations in Sri Lanka and in the Kargil Conflict in 1999, and also those in the UN peacekeeping missions.

Statue of Netaji to be installed at India Gate, Sculptor Adwaita Gadanayak from Odisha to make it