Bhubaneswar: The Hockey Olympians from Odisha were given warm reception at Biju Patnaik International Airport  on Tuesday evening after the historic performance of men’s and women’s hockey team at the Tokyo Olympics. 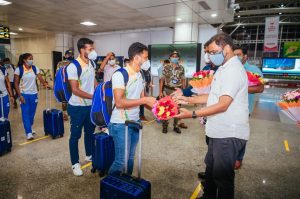 Men’s Hockey team scripted a history by winning a bronze medal at Olympics after 41 years, women’s team semifinal for the first time and gave a tough fight in the semis.

“While a dream campaign came to an end, it ushered a new era for Hockey and Odisha is proud that players from the state are forever making their mark in the international platform and this time they have brought glory not only for their state but for the entire nation. We are extremely proud of each one of them. Our Olympians have inspired a generation of young hockey players and Hockey surely will scale greater heights from here on, shared Behera.

Birendra Lakra, the legendary defender from Odisha was selected  as co vice captain of the men’s team for his second Olympics, while Deep Grace Ekka was named as the joint vice-captain of the Indian women’s hockey team for the Tokyo Olympics.