We are talking about Spinifex grass which is known for its strong roots and holds the sand dunes from erosion. The plant plays an important role to protect the sand dunes in coastal regions and prevent sea water  from entering into villages or farming land. It captures sand and helps in the formations of dune. 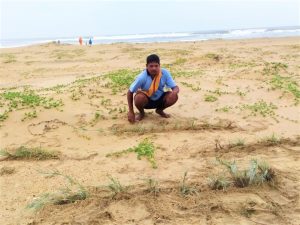 Understanding the importance of the plant species in preventing sea erosion along the coasts, Bichitrananda Biswal, a conservationists from Astaranga near Puri have started a mission of planting spinifex grass.

“To restore sand dunes, we need to plant Spinifex. However, without realising its importance people often remove the shrub. Nature has created everything with a purpose and we have to realise it,” shared Bichitrananda Biswal.

The plant species used to be abundant in the coastal areas however it is now disappearing rapidly. Prasad Kumar Dash, scientist at Odisha Biodiversity Board said, “It acts as a soil binder. Their roots expand to larger areas and hold sand dunes tightly. It has a major role in the protection of coasts during cyclones. It regenerates from roots, so eventually it would spread in larger areas.”

In 2019, Bichitrananda attended a workshop in Lakshadweep, where an expert gave a presentation on spinifex and its importance. 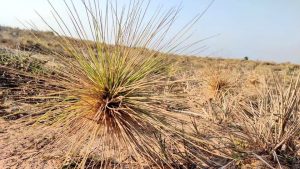 “The workshop helped me to understand that to make sand dunes on the beach, spinifex is the best option. Since then, I have been planting it during the rainy season,” he added.

Suggesting to plant the shrub along casuarina trees, he said, “If we would plant the plant species in the entire coasts of the states, it would help to create sand dunes. During cyclones or high tides water won’t enter the villages or farming lands as sand dunes and spinifex grass would act as barriers. Yaas cyclone also made me realise it.”

Bichitrananda is planning to plant spinifex in a stretch from Devi river mouth to Kadua river mouth and Sahana. “It will survive in any condition and expands over the years. I first planted this in Jahania beach and it has already created sand dunes in the area,” he informed.

Sunabeda Forest Likely to be Notified As Tiger Reserve