Malkangiri:  Over 500 Maoist supporters and sympathisers from 15 villages under Chitrakonda Block of Swabhiman Anchal in Malkangir district surrendered before the police on August 22. 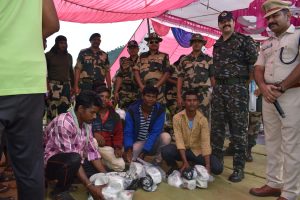 All these villages are near Odisha-Andhra border. Swabhiman Anchal has been witnessing maximum violence for the past two decades. These Maoist supporters used to assist the Maoists in violence activities and were involved in killing of security forces, civilians and were supplying all logistics to red rebels.

Swabhiman Anchal was considered a Liberated Zone and Maoists ran ‘Janatana Sarkar’ there. Till today 37 Greyhound jawans, 07 BSF personnel, 04 Odisha Police personnel and 40 innocent local tribals were killed by the Maoists in the region. Thousands of local villagers had to leave the area out of fear.

Comprising 9 GPs and 182 villages, Swabhiman Anchal has always been a safe haven for Maoists of Andhra Odisha Border Special Zonal Committee (AOBSZC) of the CPI (Maoist) for more than 2 decades.

The Ziro Music Festival of Arunachal Pradesh is back