Hirakud reservoir saw a rise in the number of migratory birds this winter. As per report, this year over 2.08 lakh birds arrived while in 2021 1.24 birds were recorded.

The number of species has also increased as this year around 104 species of birds arrived while in 2021, 98 species were recorded.

The annual migratory bird census carried out on 7 January, 19 new species of birds were also recorded at Hirakud. 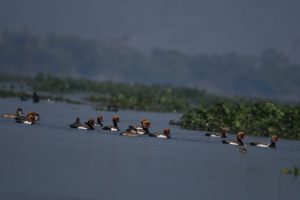 Sharing about the bird census, the Divisional Forest Officer (DFO) of Hirakud Wildlife Division, Anshu Pragyan Dash informed that this year around 52, 337 Lesser Whistling Ducks have migrated of Hirakud Reservoir  and made it their home for a few months. Similarly other highest number of bird species include around 27677 Tufted Duck, 21244 Common Coot , 13076 Little Cormorant , 11220 Red Crested Pochard .