He was speaking at a felicitation event on held Tuesday at Kalinga Stadium where the Indian Hockey teams were felicitated for their brilliant performance at the Tokyo Olympics.

In 2018, Odisha government had signed a ₹100 crore deal with Hockey India to sponsor both men’s and women’s hockey team for 5 years which would end on 2023. 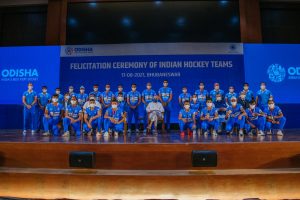 “We are elated that our partnership with Hockey India has led to this great achievement for the country. I believe Odisha and Hockey are destined to become synonymous. We will continue our partnership with Hockey India. Odisha will support the Indian Hockey teams for 10 more years. This will herald a new era of Indian Hockey and bring back the glory to the nation,” said Patnaik. 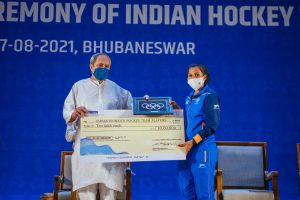 Chief Minister felicitated Captain Rani Rampal and  women’s team and also felicitated the inspirational Captain, Manpreet Singh and  men’s team for bagging a bronze which was no less than a gold for India. 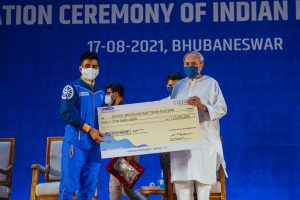 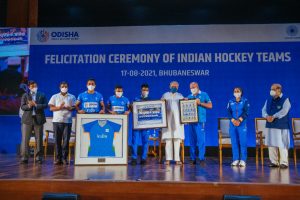 As a token of regards and appreciation, each team gifted a framed Jersey autographed by the players to the Chief Minister.

Appreciating the players he said, “You made us all so proud with your spirited fight at Tokyo. These are deeply emotional moments for India to witness the revival of Indian Hockey.” 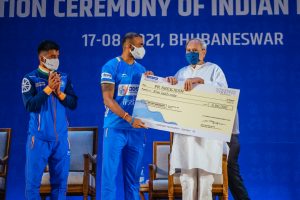 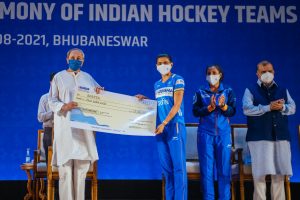 Each players were awarded Rs 5 lakhs.

President, Indian Olympic Association, Dr Narinder Dhruv Batra who has played a key role in the development of Olympic sports and sportspersons and in the revival of hockey in India and the prominence of Hockey around the globe was also felicitated by the Chief Minister.

He also felicitated Odia doctor, Col. (DR). Bibhu Kalyan Nayak who was appointed as the first Indian FIH Medical Officer for Tokyo Olympics and awarded him Rs 5 Lakhs at the ceremony.