Pune: Odisha Juggernauts clinched the title of the first edition of Ultimate Kho Kho after beating Telugu Yoddhas by 46-45 in a thrilling final match held at the Shree Shiv Chhatrapati Sports Complex at Pune in Maharashtra on Sunday.

After Telugu Yoddhas added 21 points in the third turn to take a 41-27 lead, Sachin Bhargo provided two crucial points for his side and kept Odisha Juggernauts at bay for 2.44 minutes. When he was dismissed, Telugu Yoddhas were in lead at 45-43 with just 1.24 minutes left in the match. 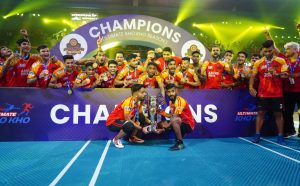 However, Lande, who tested the defence of Telugu Yoddhas with his stay of 3.03 minutes in the third turn, had different plans for Odisha Juggernauts. With just 14 seconds remaining in the game, he captured Avdhut Patil with a superb skydive that added three winning points for Odisha Juggernauts and helped them win the title.

Lande scored nine points in attack for the winning side while Rohan Shingade secured 11 points for Telugu Yoddhas. 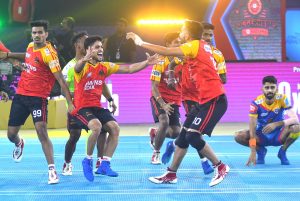 Ultimate Kho Kho is promoted by Amit Burman in collaboration with the Kho Kho Federation of India.