Bhubaneswar: After the recent announcement to continue sponsoring the Indian Hockey team for another 10 years, the Odisha government has now extended their support to the Indian Rugby team.

Odisha government will be associate sponsor for the Indian Rugby team and support the Rugby India’s High-Performance program for three years. This was announced during an event organised by Rugby India, Sports and Youth Services Department held at the Odisha State Convention Centre, Lok Seva Bhavan on Saturday.

The Kalinga Institute of Industrial Technology (KIIT) will also be one of the associate sponsors of the team.

The Indian Junior National Girls team will participate in the Asia Rugby U18 Girls Rugby Sevens Championship 2021 to be held in Tashkent, Uzbekistan on 18 and19 September. For the selection of players for the event, the national training and selection camp of the Junior National Girls team has commenced in Odisha at the KIIT University campus in Bhubaneswar from 14 August and will continue till 16 September. 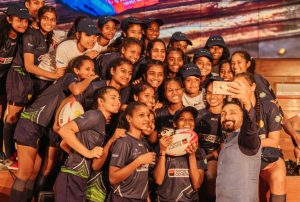 Based on performance at the last Sub-Junior National Championships along with recent fitness and skill test results, 52 girls from 13 states/UTs across India have been shortlisted to join the National training and selection camp of the Junior Under-18 Girls National Rugby team.

Chief Minister Naveen Patnaik who attended the event through video conference said, “The partnership between Rugby India and Odisha government  has started taking a shape. I am happy that the national girls team’s training camp is being organised here in Bhubaneswar. I would like to extend my best wishes to all girls who will make it to the U-18 quad that will play the Asian sevens in Uzbekistan.”

“Rugby has a special place in the sports development initiative in the state. Many of our young boys and girls are playing Rugby and making it to the national teams. Odisha will become the home of Indian Rugby. We would like to extend our full support to Indian Rugby and may this partnership thrive for many years”, he added.