Directed by Sisir Kumar Sahu and Peenakee Singh, the film is a travel movie with Partha Sarathi Ray and Suryamayee Mohapatra in lead roles.

“It’s a youth centric movie with a travel love story. The audience would love the movie which would unfold the journey of the lead characters. Getting the best feature film award in the commercial film category is an achievement for us,” said Sisir. 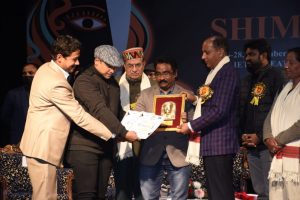 The film has been shot in some of the best tourist attractions in Bhubaneswar, Puri-Konark Marine Drive among other places.

Sisir who has worked with some of the prominent directors of Bollywood like Ashutosh Gowariker among others, is trying to bring out some good Odia films. With ‘Daalcheeni’ he introduced the new genre to the Odia film industry. His first, ‘Charitra’ was appreciated by the audience.

The makers are planning to release the movie in Odisha in December or January end.

Happy that the film is being appreciated by many, actor Partha Sarathi Ray said, “After the screening I got a call from films division India head Amrit Pal Singh. He praised my work and the movie. National award winning Malayalam director Pampally, who was Jury of National Awards, IFFI and Oscar Jury member for foreign language in 2021, also appreciated the movie. He said that the movie looks like a 4-5 crore budget film and the making is of international quality. He also praised the music of the film.”

Appreciating the content of the movie, Partha Sarathi said, “I have been trying to do such contemporary work for almost 7-8 years. Finally I have attracted the kind of people I wanted to work with.”