Odia Films, Adieu Godard and Mindgame To Premiere at KIFF

Bhubaneswar: Two Odia feature films ‘Adieu GODARD’ and ‘Mindgame’, will be premiered at the 27th Kolkata International Film Festival 2022. The seven days festival will begin from January 7 and conclude on 14.

While ‘Adieu GODARD’ is written and directed by Amartya Bhattacharyya and is produced by Swastik Arthouse in collaboration with FilmStop Entertainment and Les Films de la Haute-Vallée.

The film ‘Mindgame’ is an investigative thriller based on a true incident. Directed by Rajesh Touchriver, the cast includes Atul Kulkarni, Manoj Mishra, Tanikella Bharani among others. The film is made in three languages. 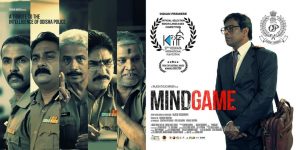 Shot exquisitely in Odisha, the film ‘Adieu GODARD’ is a socio-cultural comic tribute to the legendary French filmmaker Jean-Luc Godard. Choudhury Bikash Das portrays the main protagonist named Ananda who is addicted of watching pornography secretly with his friends in a small village. “However, they accidentally come across Godard’s film. While his friends were dissatisfied, Ananda developed an obsession with Godard’s film,” shared Amartya.