Bhubaneswar: The Department of Water Resources Odisha in association with UNICEF conducted a one-day event with Youth4Water on ‘Meet & Greet: Connect + Network + Collaborate: Ideation and achievement sharing session with youth on pani, swachta & climate change’ in which 30 youths of Odisha participated. The event was held at Rajiv Bhawan today.

Through a wide array of activities, the Youth4Water campaign aims to join youth, capacitate them and enthuse them to become leaders of change for Water Conservation, Climate Resilience, and WASH in Odisha.

Interacting with youths Anu Garg, IAS; Additional Chief Secretary Water Resources Department Odisha said that, “Youth, with their high levels of potential and motivation, are best suited to becoming the agents of change for a new, sustainable world. The Youth4Water campaign has increased engagement in newer areas such as adapting to climate change; mainstreaming gender; and optimistically engaging the youths.”

“This campaign provides a platform for youth to become thought and action leaders. Our future lies in the hands of the youths of the nation. Water and Climate Change challenges need both policy and on-ground solutions. The role of students, and youth in general, becomes very crucial in both. Young people have the power to engage with policymakers as well as bring in behavioral changes in the society through grassroots-level actions,” she added.

Since its launch, the Youth4Water campaign has reached thousands of youths through online orientation sessions and value adds to partner activities on innovations. 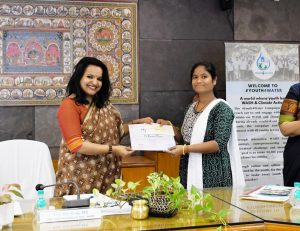 During the session, the winners of the Youth4Water Innovation Awards were awarded certificates.

The youths participating in the session brainstormed with the policymakers on how they can contribute to make Odisha water secure.

A youth group came up with an innovative idea for the ‘digitization of prescriptions in hospitals’ to promote a greener environment. They showcased their idea in the form of a skit.

Shipra Saxena, WASH Specialist at UNICEF India said, “We must amplify messages on climate change & make lives of children and youths better. UNICEF firmly believes in bringing decision makers and influencers together with young people to not only put a spotlight on issues that matter to young people the most but also generate additional opportunities for child-focussed actions and initiatives.”

Dr. Yannam Deepak, a youth participant from Youth4Water said, “Youths are torchbearers for climate action and our voices need to be amplified to raise awareness within the community.”