The 20-year-old Bansod, who beat Saina Nehwal at the India Open earlier this month, registered a hard-fought 21-13, 16-21, 21-17 win over 18-year-old Tanya Hemanth to enter the semi-finals. She will face teenager Unnati Hooda in the semis on Saturday.

Another title contender, Ashmita Chaliha also advanced to the semi-finals after defeating Rhucha Sawant 21-17, 21-15 in her quarter-final match. She will face Smit Toshniwal in the semi-final on Saturday. 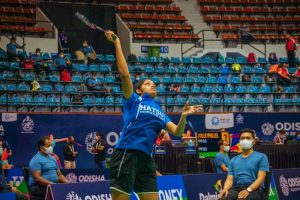 Kiran defeated Shubhankar by 21-16, 10-21, 21-19 while Priyanshu registered a 13-21, 21-14, 21-8 win over Mithun. Kiran will next face Ansal Yadav while Priyanshu, winner of last year’s Ukraine International, will be up against Kaushal Dharmamer in their semi-final matches.

Meanwhile, the women’s doubles pair of Treesa Jolly and Gayatri Gopichand took just 13 minutes for a routine 21-7, 21-3 win over Vaishnavi Khadkekar and Ellora Koner. They will face Arul Bala Radhakrishnan and Nila Valluvan in the semi-finals on Saturday.

In the mixed doubles, Treesa Jolly progressed to the semi-final with MR Arjun. The pair defeated Nazeer Khan Abu Bakkar and Nila Valluvan 21-12, 21-7 in straight games.

In another mixed doubles match, Odisha’s Swetaparna Panda and her partner Balkeshari Yadav have booked  their spot in semi final. They will face Treesa Jolly and MR Arjun to secure a place for the title match on Saturday .

Shree Jagannath temple in Puri to open from Feb 1