Bhubaneswar:  Chief Minister Naveen Patnaik on Thursday unveiled the official logo of the FIH Odisha Hockey Men’s World Cup 2023 Bhubaneswar – Rourkela at the Kalinga Hockey Stadium. The prestigious quadrennial tournament is scheduled to be held from 13 January 2023 to 29 January 2023.

Hockey India and its official partner Odisha will host the marquee event for the second consecutive time in the country after successfully conducting the event in 2018.

“It’s an honour and delight for me to unveil the logo of the FIH Hockey Men’s World Cup for the second consecutive time,” said CM Patnaik.

The 15th edition of the FIH Hockey Men’s World Cup will be staged in two cities Bhubaneswar and Rourkela, where the country’s largest hockey stadium is being constructed. The new world-class stadium will have a seating capacity of 20,000. 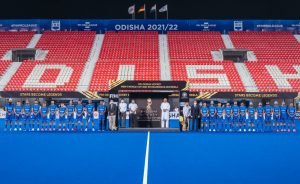 “We are thrilled that there will be two venues this time- Bhubaneswar and Rourkela. The 2018 FIH Men’s World Cup gave us all memories that we still cherish to this day and the 2023 FIH Hockey Men’s World Cup will be even more exciting and unforgettable. Odisha looks forward to welcoming global hockey fans and top teams from across the world to participate in the prestigious tournament,” he stated.

Alia-Ranbir are now husband and wife