Bhubaneswar: Disability rights activist and quadriplegic actor, Jitendra Biswal, suffering from Myopathy since his early childhood, was predicted by the doctors that he wouldn’t survive past the age of fifteen. However, defying all odds and predictions of the doctors, he celebrated his 50th birthday on September 2 this year.

The actor-filmmaker, who can hardly move his body, celebrated his birthday 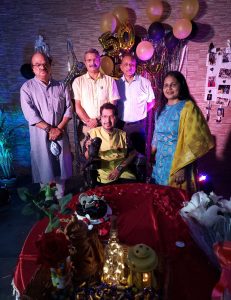 “This is a superb feeling when you defy the predictions of doctors and live beyond their stipulated time frame. I have not just been surviving, but living my life to the fullest and enjoying every bit of it by following my passion. Banking on the love and affection of my well-wishers, I would live many more years,” said Biswal.

He has acted in a Hindi movie titled ‘Two Desires and A Dream’ and has made several short and documentary films.