Aalo: The efforts of communities can do miracles has been proved by the people of Aalo in West Siang district of Arunachal Pradesh. The Pobdi Secondary school which fulfills the educational needs of seven villages consisting of Bene, Wak, Kugi Pomse, Kugi Pomte, Paya and Gune Baane in Paktu Ete Bango region of Aalo was in a dilapidated condition for years. However, now the schools has been transformed and renovated.

Around 325 government employees contributed their one day salary for the massive renovation works of the school. The renovations were carried out by Paktu Ete Bango Government Employees Welfare Society (PEBGEWS). The construction of boys and Girls Hostels will be done by the government.

The renovations work has been going on since September 2021, has been completed and the school is now ready for its students. 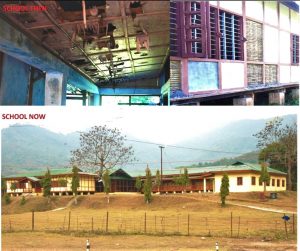 Started with a thatched house in 1961, the school was upgraded to Primary School in 1967 and then it was upgraded to Secondary school in 2010.  The school also celebrated its Golden Jubilee a few years back.

Spread across an area of 51599 sq.m,  the land was for the school was donated by ten noble souls, Tumto Ete, Rakken Ete , Mishor Ete, Jamar Ete, Imar Ete Toli Ete, Nyamar Ete, Mege Ete,  Yomkir Ete and Nyige Ete. Except Nyige Ete, all the other nine contributors are no more.

General Secretary of PEBGEWS,  Tumto Ete, who is also an alumnus of the school said that the endeavor is just an effort to contribute back to the school that was instrumental in shaping and molding the destinies of people of the area.

“It is our responsibility to appreciate the  efforts of our parents and guardians who helped in the construction of Boys Hostel and repair works of the school in the past,” he added.

Over 25,067 villages in India lack mobile and internet connectivity, Odisha is highest with 6,099 villages