Ronaldo who has been vocal about a healthy diet, removed the bottles of carbonated drinks and advised to drink water instead. 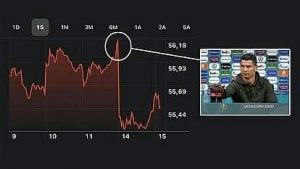 The Coco-Cola Company is a sponsor in the Euro 2020. Its share price dropped from 56.10 dollars to 55.22 dollars almost immediately after Ronaldo’s gesture, thus the market value of the brand going down from $242bn to $238bn (a drop of $4bn).

In a similar incident, France star midfielder Paul Pogba followed Cristiano Ronaldo’s footsteps and removed a Heineken bottle placed on his table at a press-conference. The beverage company is also one of the sponsor of UEFA Euro 2020.

Partial Lockdown in Odisha Till 5am of July 1