Bhubaneswar: The next time a tourist visits Puri and Konark during the evening, they would be amazed to see the well illuminated Jagannath temple and Konark temple with facade lighting.

The Archaeological Survey of India (ASI), Bhubaneswar Circle has decided to illuminate the Jagannath temple at Puri, Konark temple and Rajarani temple in Bhubaneswar with facade illumination. 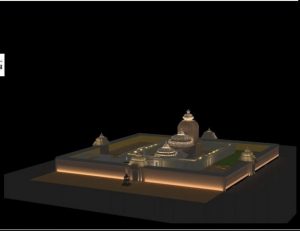 Arun Malik, Superintending Archaeologist of ASI, Bhubaneswar Circle shared, “We have decided to do the facade illumination of the three monuments. While the work of Konark and Rajarani has reached the advanced stage, the marking in the Jagannath temple has been done and the work will soon commence.”

We are planning to finish the work in Jagannath temple in two months, he added.

The three temples will be illuminated with LED lights. Warm LED lights will be used on the main temple and Meghanada Pacheri of Jagannath temple; the plinth, Jagamohana and Nata Mandapa of Sun temple and the entire Rajarani temple.

“The three structures have beautiful architecture and the facade illumination will enhance their beauty. This will also add another value for the visitors and encourage night tourism in the sites,” said Malik.