A Food Festival with focus on nutrition, culture and bio-diversity held in Nayagarh

Nayagarh: To revive the traditional preferred nutritious foods and make people aware of the benefit of locally cultivated and uncultivated diverse foods, a unique food festival has been oragnised in Tribal dominated Kandhamal, Rayagada, and Nayagarh districts of Odisha.

Recently Nirman, an Odisha based NGO organised the festival with the support of SWISSAID at Ganbharikhola village in Dasapalla block in Nayagarh district.

Over 200 recipes of local foods were prepared by the women SHGs and displayed in the exhibition. The women SHG group members also interacted with the community, shared the process of preparing such delightful and tasty food recipes, and highlighted the significance of such foods and local food systems for health. 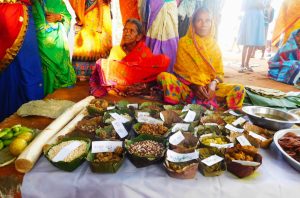 The culinary skills and creativity of tribal women in the preparation of various local foods were acknowledged by visitors.

An interaction was also held to discuss what needs to be done to revive the local foods which were rich in nutrition and bring the younger generation and children back from fast food culture.

The elders shared their knowledge with younger generation about preparing various recipes. The community also announced to join the Slow Food Campaign.