Bhubaneswar: With the flood situation continuing to remain grim in various districts of Odisha, Chief Minister Naveen Patnaik on Thursday conducted an aerial survey of the affected regions.

He took a stock of the flood situation in Khurda, Puri, Cuttack, Jagatsinghpur, and Kendrapada districts. 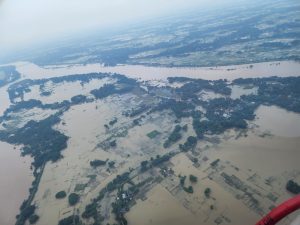 After the survey, CM announced 15 days of relief for the people of five districts. The residents of flood-hit villages of Khordha, Puri, Cuttack, Kendrapara, and Jagatsinghpur districts will benefit from the relief announced.

Over 4.67 lakh people in 1,757 villages of 12 districts have been affected by the flood. The districts are Angul, Bargarh, Boudh, Cuttack, Jagatsinghpur, Jajpur, Kendrapada, Khurda, Nayagarh, Puri, Sambalpur, and Subarnapur. 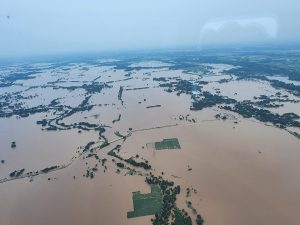 Ensuring ‘Zero casualty he asked officials to monitor the situation. So far 53,866 people have been evacuated from the flood-affected districts.